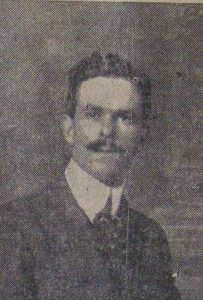 Cecil Rogers was born around 1889 to John and Elizabeth Rogers. In the census of 1901 they were living in Leicester with John Rogers recorded as a bailiff. The family clearly travelled no doubt due to John Rogers occupation with the parents born in Staffordshire but the children born in Worcestershire and Leicestershire. (Find out re the 1891 census)

In 1904 Cecil enlisted in the Dorset Regiment. At the time he would 15 or 16 years old and gave his occupation as a painter and decorator. In 1911 he was based in Ceylon which is modern day Sri Lanka. He would have been coming to the end of his time in the army.

At some point he left the army and according to John Crosby’s book A Path of Duty he left the army in late 1912 or even 1913 and moved to Foxt. His place of enlistment was Southampton . Research has unearthed a letter written by Cecil in 1912 whilst stationed at Poona in India where he refers to coming home the next year. He mentioned a friend George W who was with him and sent his best wishes.

His family appeared to stay in Leicestershire, with his then widowed mother living in Leicester itself in 1911. His father had passed away the previous year in Leicester, this was as a result of head injuries after he had shot himself whilst of unsound mine.  His mother died in Leicester in 1944.

Upon moving to Foxt / Froghall he gained employment as the local Postman for Froghall and his home was known as the Cupola between Froghall and Foxt.

In 1914 he married Annie Leese who came from Burslem. Their marriage was in Burslem and their home address at the time was given as Lower Hadderidge in Burslem, the home of his wife’s parents. Upon their marriage, it would appear they moved back to the area and lived at the Cupolo. After the war Annie remarried and moved to Buxton. (The picture above is believed to be from his wedding photo) 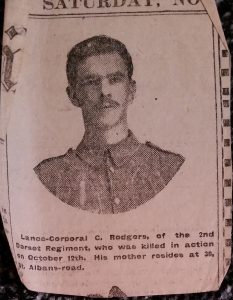 Upon the start of the First World War, as a reservist, Cecil Rogers was called back  up into the Dorsetshire Regiment. On 16th August 1914 the regiment entered into France.

The regiment were almost immediately involved in action taking part in the Battle of Mons and then the retreat from Le Cateau towards the end of August.  In the early part of September, they were at the Battle of the Marne and then the Battle of the Aisne later in the month. Both these latter two battles were also fought by Arthur Carr a survivor from Kingsley who was with the Seaforth Highlanders.

On the date of his death, the Dorset’s were involved in the Battle of La Bassee. The war diary of the Dorset Regiment is quite detailed and especially so for its entry on the day Cecil died.

The battalion marched with the 15th brigade towards Festhubert, but were halted due to shellfire. They then moved south to a canal and along the towpath to Pont Fixe.  Two companies occupied positions and a machine gun was placed on the first floor of an unfurnished factory.

Whilst there was no immediate German advance, the machine gun did open fire on some Germans in a nearby field. Further movement was detected by the same machine gun team and the German attack fell back.

By now it was 4pm and there was a general advance of the battalion with the French on their right and the 1st Bedford Regiment on their left. Two companies of the battalion were on either side of the canal and two further were in reserve. The machine gun in the factory was moved to support the attack.

‘A’ company were covered by a high bank and therefore the Germans did not detect them. In the following action they inflicted severe losses upon the Germans.

D company headed from the factory towards a small farm but came under heavy cross fire from German snipers on the high canal bank and Major Roper was killed.

However, the attack was described to have made excellent progress and a line had been established.

B and C companies moved forward and entrenched themselves on a rise upon the line that had been established. A and C companies which had done all the fighting that day then withdrew to Pont Fixe where along with Battalion Headquarters they billeted for the night.

As a result of the day’s fighting 11 men were killed, 50 wounded and 2 were missing.

As we know, one of the killed was Cecil Rogers, we do not know which company he was in and therefore unable to specify which part of the attack he was involved in. Research, however, has unearthed a letter written by a friend of Cecil’s called George who refers to Cecil as ‘Simmy’ and states the he was told by stretcher bearers that Cecil had been shot in the stomach and had died 30 minutes after. George himself was a prisoner of war upon writing the letter and asks that his parents break the news to Cecil’s mother suggesting they lived nearby.

George may have been the George W referred to in a letter written  from India(in 1912 by Cecil) and sent to Cecils mother that has been unearthed. In the 1911 Census next on the list to Cecil was a George Wilson born in Leicester. Checking Prisoner of War records and Sgt 7448 G Wilson was taken prisoner the day after Cecil’s death which matches the letter.His service number is the next one after Cecils and its likely they were good friends. He survived his time in captivity and upon release served with the Military Police.

Cecil Rogers has no known grave and is commemorated on the Le Touret Memorial. The likelihood is that like thousands killed around that time he would have been buried in a communal grave by the his comrades or  Germans.

By the time the Commonwealth War Graves Commission had developed the memorial his wife was described as Annie Vaisey (formerly Rogers) of 50 Bennett Street Derbyshire, suggesting that she had remarried. They had no children.

His death was reported in the Cheadle Herald where it described him as residing at the Cupola near Froghall. It described him as the Postman at Froghall and was exceedingly well known in that locality. A similar report is to be found in the Weekly Sentinel. A further report was made in a local paper in Leicestershire and his picture was included in that publication albeit his name was spelt Rodgers.

A relative of Cecil Rogers is Tony Rogers, Cecil is his great, great Uncle. Tony lives in Kent.