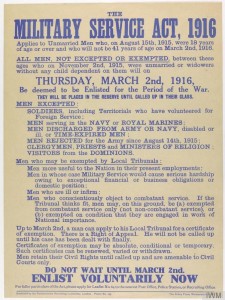 Prior to 2nd March 1916 the British armed forces engaged in the war were made up of volunteers who were professional soldiers or  who  joined as a result of the patriotic fervor that swept the country at the wars beginnings.

Men could still be exempt from military service either temporarily or long term for a variety of reasons and tribunals were set up around the country. Cheadle had one and the local papers reported on a  regular basis as to the outcome of the hearings. Whilst the  men’s names were no divulged sometimes enough detail was given so that most who knew the man would know it was referring to him.

An example of this was reported in the Cheadle Herald of 10th November 1916  when two Kingsley men appealed against conscription. Neither were named with one described as a tenant farmer who had no help on his farm but milked 12 cows each day and then walked 2 miles to the local station with the milk. He was exempted from war service until 25th March 1917 when in all likelihood he would have had to join the armed forces.

Another was that of an 18 year old Kingsley farm labourer who’s employer said he has no one to employ into the role and applied for substitution (u clear what this meant) – his request turned down and he would more than likely had to join up.

The Reverend Mayne who was the priest at St Wergburghs throughout the war years sat on many of the tribunals and from other press articles clearly supported the war and encouraged the men of the parish to sign up.