The village has three war memorials as such.

The first was installed in St Werburgh’s Church in around 1920 and bears the names of 24 men along with dates of death.

The names are in full and with the date of death have greatly assisted research.

Missing from the list are George Price Bevans, died in the war but is on Foxt Church memorial,  Leonard Edwards (who does not appear on any memorial) George W Hood and J Tideswell all of whom died after the tablet was erected but died of war related injury or illness. 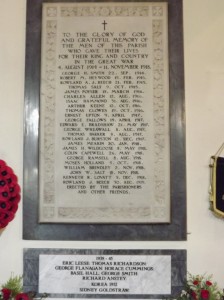 Also in the church alongside the list of the dead is a tablet moved when St John’s Church in Kingsley Moor closed down. Unusually it not only listed the dead (RIP appears against those that died) but it lists other men from the Kingsley Moor area who served and survived the war. 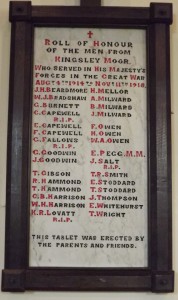 Lastly in around 1921 /22 the Wayside Cross on Froghall Bank at the junction of Dovedale Road and Church Street (Dovedale Road was constructed at a later date) was replaced by a stone memorial paid for by the parents  of Robert Miles Heywood. This memorial has a dedication to Robert Heywood but also lists all the other men  of the village with the exception of Leonard Edwards.

The picture below is of the actual dedication of the memorial , a transcript from the Weekly Sentinel newspaper is available but the date of the event is at present unknown. 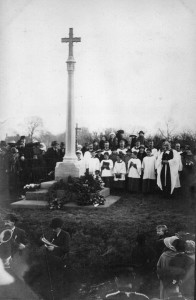