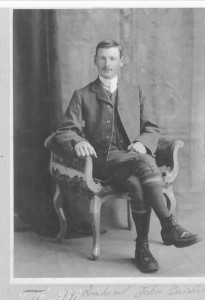 Roland Burston died through illness on this date in 1917.

His family was in the employ of the Beech family and Roland and his wife traveled widely through his work as a gamekeeper.

He was living near to Newmarket in Suffolk when he joined up and is remembered on the war memorial in his local village at Eriswell and also at a site in Weather Heath.

Roland served in Royal Army Medical Corp’s as a Private. His unit the 68th Field Ambulance went to France in September 1915 (however he was not awarded the 1914-15 Star) and then went to Salonika in late 1916.

Salonika is in modern day Greece but it was no holiday for men serving there. Disease was rife and more men died there from illness than from fighting the Bulgarian and Turkish forces opposing the British troops.

How a field ambulance worked can be found HERE

Also, Rolands story in more detail can be found HERE