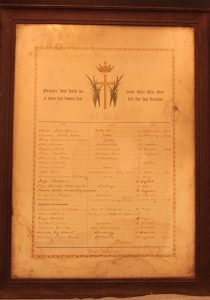 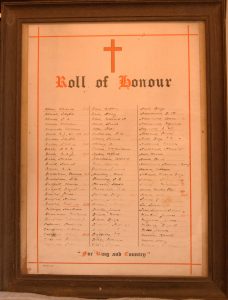 The project continues to work very hard in the background researching the  list of survivors. An unexpected discovery towards the end of April unearthed more names.

Newspaper reports throughout the years of the war carried news of the annual Vestry minutes from St Werburghs in which there was mention of Roll of Honour that by 1918 numbered around 150 men from the parish as having served in the armed forces.

Clearly a list was kept to know how many had served but whether that was created into a formal document was previously  unknown.

However, part of the Roll was discovered recently in a New Look store carrier bag in the vestry at the church.

The two  A3 sized wooden picture frames were found to contain a list of men who had died in the war and one with those who had served from those whose surname started with A through to Millward.

The frames were covered in dust and cobwebs suggesting they had been stored away from  the church before being returned at some point.

The list of those who served numbered  80 men and around 20 had been previously unknown to the project team. The names are in three columns written in the Reverend Mayne’s handwriting and there are some that are illegible as the ink has faded.

Quite where the other list is at this time is not known to the team. It will start with the name Millward as there were four from the parish that we know served. The thought at this time is that the list is in the possession of someone whose relative appears on the list.

The project team would dearly love to retrieve this list to complete the archive that is now a hundred years old. The plan is in cooperation with the church to renovate the frames and have them displayed for the public to view for years to come.

The list shows how remembering those from the parish who served extended even to those years just after the war. One name on the list that we were previously unaware of was Jonathan Billings.

Research shows he left Kingsley as a teenager to seek work and in 1911 was living on the south coast and working as a chauffeur. Before the war started he emigrated to Canada and in 1916 joined the Canadian Expeditionary Force and served in France as a driver. On his way to France and on his way home he came to England perhaps for the only times after he left.

Despite the length of time after he left the parish he was still remembered,  something that is at the heart of the project.

Another discovery was the name of a female on the Roll of Honour. Her name was Mabel Keene and she came from the Green in Kingsley. She served as an auxiliary in France from 1918 when woman replaced  cooks and the like to ensure men were available for front line duties.  Initial research indicates that she never married and died in the 1950’s in Penzance. We would love to speak to anyone who is related to Mabel.

The two frames we currently have are pictured and if anyone has any information as to the location of the missing frame they can contact Martyn Hordern either via the website or on 01538 750657.