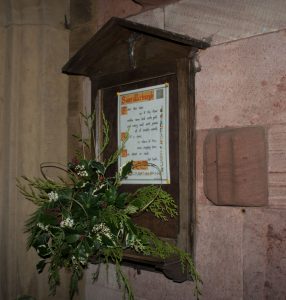 Whilst researching the project a newspaper report was unearthed from 1917. It referred to Mrs Annie Heywood, who was the mother of Robert Myles Heywood who had died in 1015.

The report stated that on 22nd April 1917 a shrine made of oak with two glass bowls incorporated into it had been unveiled at St Werburgh’s Church. It mentioned that it has a crucifix on it.

Mrs Heywood stressed that the shrine was not just to her son but for all the village’s war dead and listed those who had died to that date.  The intention was that those who had lost a loved one in the war could place a slip of paper with their loved one’s name on into one of the bowls.

It was only sometime later in the project that the shrine’s location was realised as being in the porch at the church. Flowers are always on display in it except for lent, the glass bowls have long since gone. Members of the church until this point had no idea of the shrine’s origin.