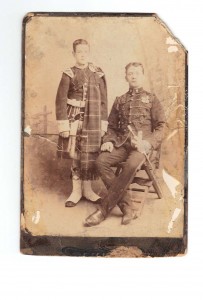 Arthur Carr as a boy soldier not long after enlistement

By 1901 Arthur, then aged 12years, was at ‘The County of Stafford Certified Industrial Boys School’ at Caverswall, where he is described as a ‘Scholar and Shoemaker’.  (1901 Census).  Certified Industrial Schools were provided for vagrant, pauper or orphaned children aged 7 – 14 years to provide a basic education and some occupational skills.

In 6th February 1905 Arthur Carr, then aged 15 years and 11 months, enlisted in the Seaforth Highlanders for a period of 12 years.  During his initial medical examination he was described as 4 feet 11 inches tall, weighing 82 lbs (less than 7 stone) with a 30 inch chest. His physical development was considered ‘Good’ and he was endorsed as ‘Fit for military service’.  There is no record of a parent or guardian being required to agree to his enlistment.  (Army Records)

Private Arthur Carr, Service No. 9163, was allocated to the 2nd Battalion, Seaforth Highlanders, based at Fort George, near Inverness, Scotland.  It would appear that he spent the early years of his army service at various Scottish / UK barracks. 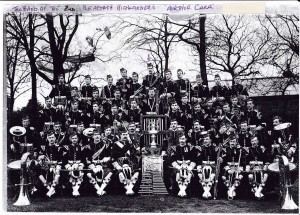 In August 1914 the 2nd Battalion Seaforth Highlanders were deployed to France / Belgium as part of the British Expeditionary Force and saw action during a number of early campaigns.  Arthur Carr saw active service during the 1914 battles of Marne and Aisne. (Personal Pipe Inscription).

An undated 1915 article in the Staffordshire Weekly Sentinel titled ‘Men from Kingsley Serving’ states, ‘Bandsman (Private) Arthur Carr of the Seaforth Highlanders has a long service to his record.  His letters home have always been of the cheeriest disposition and only a short time ago he said he would not be surprised if one of his chums, Fred Cope, arrived in the trenches with British Fleet as at that time there was enough water to float the ships.  He has been in several engagements and fortunately he came through them alright’.

On 24th May 1915 the regiment were in front line action at Ypres when Arthur Carr was shot in the left knee causing him a serious injury.  He was returned to the UK as a war casualty three days later.  (Army Records).

During a later medical examination Arthur Carr was diagnosed as ‘Hit by bullet in the left knee.  Injury to sub tibial nerve.  There is ankle drop.  No active movement of the ankle or toes’.  Arthur was discharged from the army on 17th November 1915 aged 26 years as being ‘No longer physically fit for war service’. He was awarded a disability war pension of 12 shillings and 6 pence per annum.  At this stage Arthur gave next of kin as Grandfather Benjamin Carr, Grandmother Lydia Carr, Uncle Abel Carr and his ‘Intended Place of Residence’ as 44 High Street, Kingsley, (Army Records).  The Old Smithy at 44 High Street, Kingsley, was the then home of William Carr and his family. (Same surname but apparently unrelated).

During December 1915 a charity football match and other fund raising events were held in Kingsley to raise funds for Arthur, a total of £10 was collected for his benefit.  (Cheadle Post and Times 24th December 1915).

It is believed that Arthur Carr was fitted with some sort of footwear / apparatus to assist his walking, he initially walked with a limp and used a stick.  It is believed he remained in the area for some time possibly at 11 Hazles Cross Road, (1918 Voters List).  During the period 1916 – 1922 he attended a number of pension related medical examinations in Stoke on Trent.

On 15th February 1923 his case was considered by a Special Medical Board at Birmingham who concluded, “Walks well without a limp. T & T and operation scar left leg. Practically no movement of ankle joint.  Foot held in position.  Slight plantar flexion.  No voluntary movement of toes.  No wasting of of the thigh or calf. No secondary deformation of foot or toes. Slight general wasting of the foot. No anesthesia.  Finding:  GSW Left leg. 25% Pension.  Signed  (Illegible)”

On 4th November 1922 Arthur Carr married Elsie Annie Mills, born Kingsley 1891, at St Werburghs Church, Kingsley, at that time Arthur was living in Kingsley Holt.  (Marriage Certificate).  It seems highly probable that in the period October – December 1924 they had a child Jane Carr who sadly died aged about 12 months. (Birth and Death Registers).

Footnote 1:  The Seaforth Highlanders was an historic infantry regiment of the British Army, mainly associated with large areas of the northern Highlands of Scotland. The regiment served in Britain’s later colonial wars, in Egypt (1882), Sudan (1885), India (1895) and the Boer War (1899-1902). The Seaforth Highlanders have varied in size from two battalions to seventeen battalions during the Great War. After several mergers, with the Queen’s Own Cameron Highlanders they formed the Queen’s Own Highlanders (Seaforth and Camerons), which later amalgamated with the Gordon Highlanders to form the Highlanders (Seaforth, Camerons and Gordons), they have existed since 2006 as 4th (Highlanders) Battalion of the Royal Regiment of Scotland.  (Wikipedia)

Footnote 2:  At the outbreak of the Great War the 2nd Battalion was sent to France as part of the British Expeditionary Force (BEF). As part of the10th Brigade, 4th Division, it took part in the retreat from Le Cateau, the Battle of the Marne and the subsequent chase of the German forces to the River Aisne. In mid-September 1914, the battalion was heavily involved in the Battle of the Aisne, suffering heavy casualties.  (Wikipedia)

Footnote 4:  In November 1915 prior to discharge from the army, Arthur Carr gave his ‘Intended Place of Residence’ as 44 High Street, Kingsley, (Army Records), the then home of William and Annie Carr and their family.  Arthur was apparently taken in by the family.  Dorothy Carr (born 1921) was the youngest of William and Annie’s five children. Dorothy later married and became Dorothy Gibson.  She and her husband and brother William Carr remained living at 44 High Street, Kingsley, until about 1996.  Dorothy, now aged 94 years, is presently at The Vicarage Care Home, Vicarage Road, Tean.  (Family History).

Footnote 5:  A number of artefacts were given by Arthur Carr to William Carr, these included a ceremonial silver embossed stick, a brass Princess Mary Box and contents, (a 1914 Christmas present from public funds based on an idea initiated by the 17 year old Princess Mary) and a pipe which is believed to have been personally inscribed by Arthur Carr with the Seaforth Highlanders regimental crest and brief details of his war campaign ‘1914 – Marne – Aisne’.  These artefacts were later passed on to William’s oldest son, Roland Carr, and later to his grandson Donald Carr, who retains the items as treasured family heirlooms. 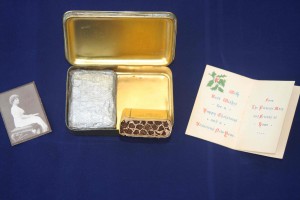 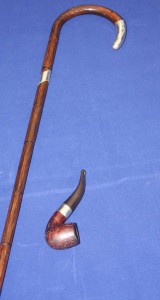