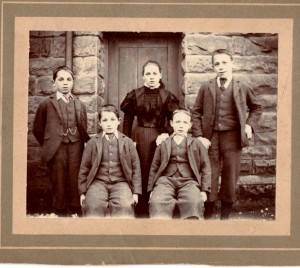 Arthur Keene was born in 1888 in Kingsley, the son of Samuel Keene (a Blacksmith) and Jemima Keene (nee Harris), the fifth of their five children.  Arthur had three older brothers and an older sister.   By 1891 the family were living in Whiston and remained in the village for some years. (1891 and 1901 Census).

In 1911 Arthur, aged 23 yrs, was described as being employed in Farming.  His brothers Walter Thomas and James were employed as Blacksmiths, brother Joseph was as a Wheelright and Joiner and sister Elizabeth was a Grocer.  (1911 Census).  Probate records indicate the family were living at The Dovecote, Whiston.  (Probate Register).

On a date (as yet) unknown Arthur Keene joined the Army, Service No. 37105, and was posted to the Lancashire Fusiliers, 2nd Battalion, and was involved in active service in Northern France. His entry into the theatre of operations was in 1916 as he was not awarded the 1914-15 Star which awarded to those who saw active service in either 1914 or 1915

The Lancashire Fusiliers, 2nd Battalion, were involved in the Battle of the Somme on the Western Front between July – November 1916. It is entirely possible that Arthur Keene saw action on the first day of the Somme offensive on 1st July 1916.

On 12th October 1916 the Battalion were involved in a major offensive near to the road between Lesboeufs and Le Transloy, (Somme region).  An attack involving several battalions was planned to commence at 2.05pm, (Zero Hour).  Shortly beforehand a enemy aircraft flew overhead and will have seen the allied troops assembling in the trenches.  The following are extracts from the Regimental Diary compiled by an unnamed Staff Officer; “12.30pm. 12 Huns came into our line and surrendered.” – “1.30pm. Zero Hour 2.05pm.  The Dukes (abbreviation for unknown Regiment) to attack the length of trench occupied by the Hun….and then at 2.25pm the rest of the Division to attack.” – “2.00pm. Bombardment heavy.  Bayonets fixed.” – “2.03pm. Hun plane flew straight down our line about 300 feet up, must have seen the trenches crowded with men.  None of our planes in sight” – “Fiendish row. Zero hour. Heavy enemy barrage. The Dukes attacking on our right but can’t see much” – “Enemy machine gun barrage pretty unhealthy” – “2.50pm. 50% Company down”. – Later entries; “Only about 12 men left out of 100” – “Attack an absolute failure”.  (War Diary – Lt Hawkins – 2nd Battalion, Lancashire Fusiliers).

The actual dairy / report can be viewed HERE it makes sombre reading. 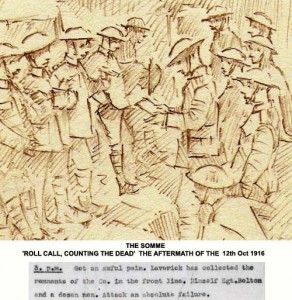 Arthur Keene was killed on 12th October 1916, the circumstances of his death other than he was likely involved in the above mentioned attack are unknown.. The adjacent sketch from the time indicates the scale of the loss. Research on the Commonwealth War Graves Commission site show that 144 men from the second Battalion died on that day. A full strength battalion in World War one numbered just over 1000 officers and men giving the scale of the loss on this one day.

Arthur Keene is commemorated at the Thiepval Memorial, Northern France as having no known grave a fate that befell many on that day and throughout the offensive.

Footnote 1.     The Battle of the Somme took place between 1 July and 18 November 1916 on both sides of the River Somme in northern France. The battle was one of the largest of World War I, in which more than 1,000,000 men were wounded or killed. (Wikipedia).

Footnote 2.  The Thiepval Memorial commemorates the 72,000 British soldiers who lost their life on the Somme and have no known grave.  (CWGC Website).

Footnote 3.  As yet we have been unable to locate the Army Records of Arthur Keene.  His records may not have survived and like many others were probably destroyed in German bombing during the ‘Blitz’ in 1940 during WW2  when the War Ministry was hit and many thousands of military records were destroyed.

Footnote 4.  Family descendants of Arthur Keene still live locally.  His brother Joseph was a successful in business and owned many farms and houses around the village.  His nephew Samuel Keene owned the Filling Station / Garage in Whiston for many years up to circa 1975.  He is the Great Uncle of Malcolm Keene, (who lived at Cottage Farm, Whiston, until recently) and Joyce Worthy (nee Keene) who lives in Leek.