Friday 1st July 2016 is the centenary of the start of the Battle of the Somme.

This post is timed to become active at 7.30am a hundred years to the minute when officers whistles were being blown to signal the men to leave the trenches and advance towards the German lines.

6 men with direct links to the Parish lost their lives during the battle which raged until 18th November 1916.

On the anniversary of the battle,  two volunteers from the project team are attending the events at the Thiepval Memorial in France to commemorate the six men as well as visiting the graves of a number of other men from the parish buried in the area.

They will place a wreath at the memorial and wooden poppy crosses at the graves they visit.

On that first day, some 19240 men lost their lives and another 38,000 were wounded. It was the worst day in history for the British army.

Over the course of the battle, there were some 420,000 Commonwealth casualties including over 95,000 dead.

French and German casualties took the total to well over 1,000,000.

Five of the men who died are featured on the Parishes two memorials and their stories are to be found on this site.

All bar Thomas Clowes have no known grave and are commemorated on the Thiepval Memorial. 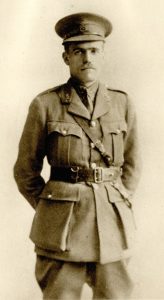 The sixth man did not live in the Parish but had business interests in it and was one of the first Trustees of the Reading Room in 1913 (now the Village Hall) along with the Reverend Mayne and Rowland John Beech from Shawe Hall.

He was William Aubrey Bowers and was born in 1887 at Barlaston Hall to Eli and Alice Bowers. The family home was later at Caverswall Castle. He studied at Winchester College from 1900 to 1906. Soon after leaving the school he was elected as a member of the Staffordshire County Council.

His father who died in 1911 was a patron and founder of Caverswall Cricket Club and William took over from him and also played for the first team. In 1913 William married Vera Latham in Kensington, London where he had studied after college as well as at Oxford University where he gained a Masters in the Arts.  They had a single child Penelope Vera born in 1915 and died in 1952.

The families business links were wide and varied and included the Berryhill Brick works who also owned the Kingsley Brick Works, Park Hall Colliery located between Kingsley Moor and Cheadle, Hazlewall Colliery at Kingsley Moor and  Foxfield Colliery. In addition, the family owned a Lime Burning business at Froghall along with a Cheadle man called Primrose Thorley (whose own son died later in WW1) the business was called Bowers and Thorley. The family also owned property in the Parish.

One for the project team’s volunteers Martyn Hordern has a direct line to the Bowers family as his great and great, great grandfathers worked for Bowers and Thorley. Indeed his great grandfather purchased his house (on Shawe Park Road) in 1913 from William Aubry Bowers and in addition was willed a sum of money each year from Eli Bowers will having worked for him for many years.

To see a picture of one of Bowers and Thorley’s boats (the tiller man is Francis Hordern great grand father of Martyn) click this link to the Staffs Past Track site which has some great photos of the area.

On 2nd April 1915, William Aubrey Bowers applied for a commission with the 3/5th Batallion of the North Staffordshire Regiment. Following his enlistment, the Cheadle and Tean Times and the Cheadle Herald  reported in May 1915 that William Bowers, officers and 120 men from the Batallion spoke at the Market in Cheadle. William addressed those gathered and asked that men volunteer for the battalion and to put the country first.

Following his death, the Cheadle Herald reported he had been a Musketry Officer involved in the  training of marksmen and general shooting.

In May 1916 William transferred to 1/5th North Staffords and on 1st July Batallion were at the Battle  Somme and in the line of attack for that morning at a place called Gommecourt. Unusually perhaps we have a first-hand account of how William Aubrey Bowers lost his life. Thomas Higgins was a private in the Batallion and kept a diary which has been produced as a book called Tommy at Gommecourt.

As the soldiers were moving up the communication trenches prior to the attack Thomas Higgins describes them as running with the  blood of those who had gone before them and he had to step over the bodies of the fallen. He was carrying a roll of barbed wire and it kept getting snagged as he made his way.

William Aubrey Bowers offered to help carry part of his load and as he did so a shell burst overhead mortally wounding Lieutenant Bowers who fell to the bottom of the trench. Private Higgins says in his diary that William Bowers was dead but we know he was taken from the trench to the 20th Casualty Clearing Station where he died the following day. William Aubrey Bowers was 29 years old. His estate at probate was valued in excess of £8,000,000 based on current values and maybe a lot more. 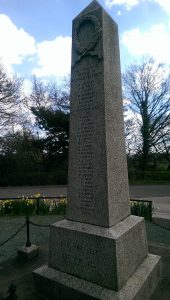 Following the end of the war in October 1919 a memorial in the form of a monolith was unveiled at the Park Hall Colliery in honour of all the men from the colliery who served in the war and the four who died (one was Kenneth Lovatt). Present was his daughter aged just 4 years albeit his wife was unwell and unable to attend.

Another present was George Chandler who joined up with James Poyser from Kingsley who died in 1916 and both served in the Leicestershire Regiment. Following the closure of the colliery, the monolith made of Cornish Granite was moved to its current location at Foxfield Colliery.

The original minute book of the Reading Romm still exists and William Aubrey Bowers features as being present at meetings. The entry where it records him as a Trustee is struck out in pencil followed by the words ‘died in war’