George Fallows (the subject) was the son of Richard and Annie Fallows born in the period April – June 1896, the fifth of their six children, at which stage the family were living in the Cheadle District, (Birth Register), possibly at Above Park Farm.  By 1901 the family were living at The Lodge Farm, Basford, Nr Cheddleton, at which stage the children were Richard (Jnr, 12yrs), Emmie (9 yrs), Olive (9 yrs), Lizzie (8 yrs), and George (4 yrs).  (1901 Census).

In 1911 Richard and Annie were still living at Lodge Park Farm, Basford, only their youngest child Arthur (aged 6 yrs) remained living at home.  The subject George Fallows (14 yrs) is not mentioned, his whereabouts at that stage are unknown.  (1911 Census).

On a date as yet to be established George Fallows joined the army.  He became Private No. 40347 and was posted to the South Staffordshire Regiment, 2nd Battalion.  (Ancestry Military Records).

Full Army record required, (not located at this stage)

The War Diary of 2nd Battalion South Staffordshire Regiment contains details of a major offensive on 17th February against nearby enemy trenches in the area of Pys, Picardy, Northern France.  The Commanding Officer Lt Colonel Bates gives a detailed and graphic account of the weight of enemy fire directed against his men and of the heavy losses sustained.  Major General (2nd Division Commander) later comments in response, “I have read your accounts of the attack made by the 2nd South Staffords on 17th February and I attribute the failure of the attack entirely to the fact that a deserter had given the enemy several hours warning of our intended attack, thus enabling him to bring heavy artillery barrages on the troops  assembled in the open and to increase the garrison of desire and support trenches and to have machine guns trained to meet the attack zero”.  –  “I very much regret the heavy loses the 2nd South Staffords incurred and I know if it had not been for the warning the enemy obtained we should have captured the objective with comparative ease”.

It would appear that in February 1917 George Fallows was captured by the enemy and that he died in April some two months later.  (Cheadle Herald and IRC).  The circumstances of his capture and subsequent death are unknown however research conducted via the International Red Cross has unearthed his POW records which confirm that he was captured on 17th February 1917.

Below are the actual IRC records. 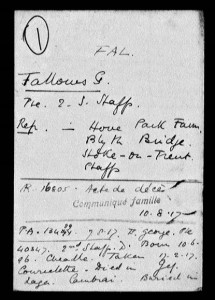 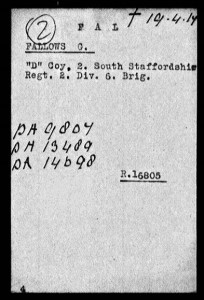 Available information indicates that George Fallows died on 19th April 1917 in Northern France.  (St Werburgh’s Plaque).   He is commemorated at the Cambrai East Military Cemetery, (South East of Arras), Northern France.  (CWGC Records). He died according to the Red Cross records in a POW camp at Cambrai. The cause of his death is unknown. The record indicates his family were informed in August of that year and this is referred to in the press report. 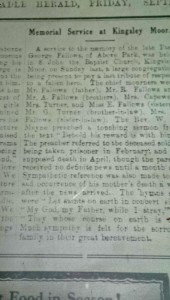 The following is an extract from the Cheadle Herald Friday 26th September 1917, “A service in memory of the late Private George Fallows of Above Park was held at St John the Baptist Church, Kingsley Moor, on Sunday last.  A large congregation being present to pay a last tribute of respect to a fallen hero”.  –  “The Preacher referred to the deceased soldier being taken prisoner in February (1917) and his supposed death in April, though his parents received no definite news until a month ago (August). Sympathetic reference was also made to the sad occurrence of his mothers death a week after the news arrived.”  (Cheadle Herald).

We have as yet not traced any family of George Fallows and would love to hear from anyone with news of his descendants or any information relative to him.