Records relating to his death in the war  indicate that he was born in 1884 being 32 years at the time he died. However our research indicates that he was born in April 1894 , the son of Thomas and Elizabeth Mary  Bevans (nee Price) of The Wharf, Froghall, Staffs.

In 1891 from the census of that year we have one Elizabeth Mary Price aged 22 born in Shropshire working as a servant at Woodland View Froghall. Elizabeth Price and Thomas Bevan married in the Cheadle area (quite possibly St Werburgh’s Church) in the summer  of 1891.

In 1901 the family comprised of George aged 6 years and his sister Sarah Elizabeth Bevans aged 3. They were living with Elizabeth’s parents at Norton Farm in Condover, Shropshire with Thomas’s occupation being given as a shepherd. (1901 Census)

By 1911 the family are back in Froghall living at the Wharf with a third child, a son named John Thomas who was five. George Price Bevans is a labourer on the North Staffordshire Railway and his father a wagoner with the same company. (1911 Census)

There is no known record of George marrying. At some point he joined the army enlisting in Stoke on Trent and was posted to the Black Watch Regiment.

We do not know at what point in 1916 that George was sent to France but by September 1916 he was on the Somme with his battalion which was in reserve at Albert roughly between Arras and Amiens. However by the 6th September they were as the war diary phrases it in the ‘firing line’ relieving the Camerons.

The 9th Battalion The Black Watch and another four battalions of the regiment were involved in the battle that dominated 1916 – the Battle of the Somme. (www.theblackwatch.co.uk)

Their position on the front line was between High Wood and Bazentin Le Petit and was described as very difficult to hold. On 7th September they were shelled by the Germans which seriously wounded one officer and killed one other rank and wounded three others.

On the following day the battalion were under machine gun fire and shelling which caused some casualties. However at 6.30pm that day two companies attacked the German trenches killing 70 and capturing 30 along  with two machine guns and capturing the trench. After initially consolidating their gain, due to the Gloucestershire Regiment on their flank falling back  the Black Watch came under a strong enemy attack which forced them to withdraw.

Casualties were one officer missing believed wounded, 2 officers wounded with 24 other ranks killed, 14 missing and 59 wounded.

The following day, whilst still at the front seems to have passed with little incident despite shelling and machine gun fire other than a further attack by a unit to the battalion’s flank that was described as causing serious casualties to the enemy.

The unit was then withdrawn from the front line on 10th September with the diary recording casualties as 6 officers and 119 other ranks (killed, missing, or wounded) . The war diary records in the coming weeks that 5 soldiers were awarded the Military Medal and one the Distinguished Conduct Medal  for their bravery on 8th September. Given the action on that day was by two companies of less than 500 men these awards indicate the nature of the fighting on that day. 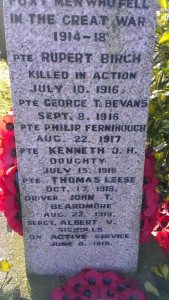 George Price Bevans was one of those to lose his life  on 8th September 1916. Whilst it is assumed he died taking part in the attack on the enemy trenches the precise nature of his death is not known but his body was never recovered. He is  commemorated at the Thiepval Memorial for the 72,000 men who lost their lives during the Battle of Somme and have no known grave. As well as being commemorated on the memorials in Kingsley. George Bevans is also commemorated on Foxt’s War Memorial as George T Bevans.

George was also featured in a book written by John Crosby called Path of Duty featuring the men of Foxt and Ipstones who died in the war. As often happened men appeared on more memorial. The relevant extract from John’s book can be found HERE (Requires rotating to view) The project team are extremely grateful to John for his assistance in research and encouragement throughout our research.

Footnote 1.  On 1 July 1916, supported by a French attack to the south, thirteen divisions of Commonwealth forces launched an offensive on a line from north of Gommecourt to Maricourt. Despite a preliminary bombardment lasting seven days, the German defences were barely touched and the attack met unexpectedly fierce resistance. Losses were catastrophic and with only minimal advances on the southern flank, the initial attack was a failure. In the following weeks, huge resources of manpower and equipment were deployed in an attempt to exploit the modest successes of the first day. However, the German Army resisted tenaciously and repeated attacks and counter attacks meant a major battle for every village, copse and farmhouse gained. At the end of September, Thiepval was finally captured. The village had been an original objective of 1 July. Attacks north and east continued throughout October and into November in increasingly difficult weather conditions. The Battle of the Somme finally ended on 18 November with the onset of winter.The battle was one of the largest of World War I, in which more than 1,000,000 men were wounded or killed. (Wikipedia).

In the spring of 1917, the German forces fell back to their newly prepared defences, the Hindenburg Line, and there were no further significant engagements in the Somme sector until the Germans mounted their major offensive in March 1918.

Footnote 2.  The Thiepval Memorial commemorates 72,000 officers and men from Britain and South Africa who lost their lives during the Battle of the Somme and have no known grave.  Four men from Kingsley Parish are commemorated on the Thiepval Memorial; Charles Allen (died 12th August 1916), Isaac Hammond (died 31st August 1916), George Price Bevans (died 8th September 1916) and Arthur Keene (died 12th October 1916).  A fifth man Thomas Clowes (died 19th October 1916) also lost his life in the battle and is buried nearby in a military cemetery at Arras.

Footnote 3. An infantry battalion in this era comprised some 1000 soldiers of which 30 were  officers when at full strength. Each company had around 225 soldiers including officers. However it was not uncommon for a battalion to have a fighting strength of 200 and on 8th September 1916 its unlikely that the two company attack would have been with 500 men. (http://www.1914-1918.net)

Footnote 4 A typical battalion spent perhaps only 5-10 days in a year in intensive action; they would also spend 60-100 days in front-line trench activities without being in action, with the rest of the time being in reserve or at rest, both of which entailed continual effort on fatigues or training.(http://www.1914-1918.net)