As the war intensified so the casualty rate amongst Kingsley’s men increased. George Wheawall was the sixteenth man with links to die in the war which was by that time into its fourth year. 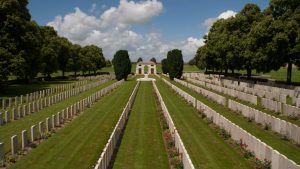 George was shot by a sniper whilst bring in a wounding man in the Arras area. In the spring of 1917 the area was at the centre of the battle for Arras and the cemetery where he is buried (Brown’s Copse) is another of those stunningly sad and beautiful sites cared for by the Commonwealth War Graves Commission.

The project team were honoured to visit Georges final resting place last year and to place a poppy cross on behalf of the community and his family.

Further tragedy was to befall the family as George’s wife died in 1918 in the great flu pandemic and his two boys were looked after by George’s sister Mary and her husband Jim Flanagan, who himself was a veteran.

The photo adjacent is a fascinating then and now picture of Brown’s Copse comparing it in the war to more recently.

The project team had until last year being in touch with George’s descendants, Mandy Jones and her father but we have lost touch recently. If they read this or you know the family please ask them to get in touch via this page.

Today is also 99 years since George Ramsell lost his life in 1918.