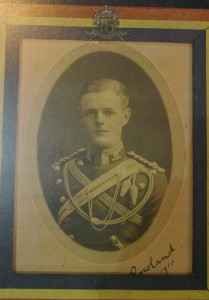 Rowland Auriol James Beech was born on 22nd August 1888 in Chelsea, London, the third child of Rowland John Beech and Adelaide Frederica Beech (nee Cure), his siblings being Christabel (Kitty), Irene and younger brother Douglas.  The family had a country home at Brandon Hall, Nr Coventry, Warwickshire, where they were living in 1891, with four other relatives and 16 members of the household staff.  (1891 census).

Rowland Auriol James Beech was popularly known as ‘Jim’ by his close friends and family.  Jim Beech was educated at Eton where he was awarded several annual book prizes between 1899 – 1906, (aged 11 – 18 years).  He was an accomplished rower winning various medals in the sport.  In 1906 (aged 18 yrs) he was the cox in a trails eight rowing crew at which time he weighed 8 stone 8 pounds.   Jim was also a fine horseman who enjoyed participating in the local Atherstone Hunt, show jumping and competing in local horse races.

By 1911 Jim (then aged 23 yrs) had joined the 16th (The Queens) Lancers, and was stationed at the Cavalry Barracks, Barracks Street, Norwich, at which stage there were 11 Commissioned Officers, (including Lt Jim Beech), and 285 other ranks at the barracks.  (1911 Census).

The following is an extract from ‘At The Going Down of the Sun – 365 Soldiers From the Great War’:  “Rowland Auriol James Beech was a typical cavalry officer of the Regular Army.  As well as a London House at No. 5 Eaton Square, Belgravia, the family owned two country estates, Shawe Hall, Kingsley, Staffordshire, which comprised several thousand acres and tenanted farms, and Brandon Hall, Nr Coventry, Warwickshire.  Rowland, known to his family and friends as ‘Jim’ much preferred Brandon, for it was situated in excellent hunting country and he and his brother hunted with the Atherstone Hounds.  Jim was a handsome, athletic, intelligent boy, who carried off many prizes at Eton and was the “apple of his parent’s eye.”  “As an officer of the 16th Lancers he went to war with the Cavalry Division in August 1914.  They fought at Mons, were rear guard to the infantry on the long retreat to the Marne and back to Flanders and the Salient.  When the stalemate set in after the first battle of Ypres, the cavalrymen dismounted and were sent into the trenches.  The 16th Lancers were holding trenches just north of Klien Zillebeke on the edge of a wood they called Shrewsbury Forest, only a matter of 10 metres from the enemy lines.”  (At The Going Down of the Sun – 365 Soldiers From the Great War).

The picture below was taken in 1914 and shows from the left Jim’s brother in law who lost his life in October 1914, their General who was killed in 1917 and  of course James Beech himself. 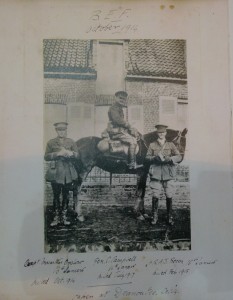 The following is an extract from the War Diary of the 16th Lancers, (believed to have been written by the Regimental Adjutant), “It had been suspected for some days that the enemy was running a sap (a tunnel) at the bottom of the ditch and a close observation had been kept on it, but no sign of anything of the sort had been discovered.  It turned out afterwards that the enemy had really dug a sap half way down it, but had turned off at a sharp angle and continued the sap underground until it ran under the centre of the trench of D Squadron, and that three mines had been placed at the end of it.  It was afterwards ascertained from prisoners that the mines had been laid some days before the 16th had taken over the trenches, but that the explosion had been delayed with the intention of catching the relief when they were taking over on the 18th, but the opportunity had been missed.

At 6.00am on the 21st one mine was fired, followed immediately afterwards by the other two, with the result that the trench was completely destroyed.  The enemy followed this up with a strong attack on the trenches on each side of that held by D Squadron.  There was of course much confusion and a hand to hand combat, in which the enemy was finally driven back by A Squadron and the reserve troop of D with a machine gun.  A counter attack was made by the three reserve troops.  They were unable to regain the lost trench, and a request was sent to two companies of the French Infantry which were in support of the left section of the trench, but these refused to move without orders from their own commanding officer, and when he came up he was unfortunately killed while giving the order to advance.

No further attack was made until 9.00am when the line was reinforced by a Squadron of the 20th Hussars and another company of French Infantry from the supporting line.  The French were stopped at once by the heavy fire they were met with, all their officers and half their men being shot down in a few minutes.  The 20th got a little further when they were bought up by enfilade fire and the attack was broken off.  No further attempt was made to regain the lost trench, but a new one was dug in rear of it.  This was the worst day which the 16th had during the whole war.  When the roll was called it was found that Major Neave, Capt Nash, Lt’s Beech, King and Cross and seven men were killed and Lt Patrick and 29 men wounded.  In addition Lt Ryan and 11 men were missing.  In all seven officers and 47 other ranks were killed, wounded or missing.”   (16TH Lancers, War Diary).

The following is an account given by a Private in the Troop commanded by Lt Jim Beech, “I cannot tell you where the engagement took place, we have been in the vicinity before, and to get to it, the troops are subject to three fires from front, from left and right flanks, so curiously does the firing line bend in this district. Before actually arriving at the above place we were held in reserve.  After this we proceed to the trenches, and nothing very exciting happened until Monday morning.  I should tell you that some of the trenches were as near as 12 to 15 yards from the Germans.

“I was just finishing my three hours sentry looking over the top of the trench.  I suppose the time must have been about six in the morning, for it was almost dark when the explosion took place.  My chum and I and of course with the other chaps in reserve immediately manned our loop holes, and, I think, were mostly under the impression that we were being shelled.  But we were soon to know.  They had mined the trenches of D Squadron and were making an attack, fellows were dropping everywhere and being dark it was damned hard to sift things out until our officers saw what was required”

“Lt Beech, of A Squadron, claimed all the men near him and he himself gave a push up out of the knee deep mud and we scrambled out into another trench, closer up to where the Germans were pouring through.  Here we let them have it, and incidentally, covered the fire of our maxim gun behind us, which played the devil with the square heads.  Mr Beech did not get into the trench with us, but crouched behind observing fire, etc, and I happened to turn around and saw him drop onto his face.”  (Unnamed Private – 16th Lancers).

The following is an extract from a letter written by a General Officer to Jim Beech’s parents, “You know Jim was hit rushing forward gallantly at the head of his troop and that his action together with three other officers saved the situation and prevented the Germans gaining anything of consequence.” (Unnamed General Officer – British Roll of Honour).

“It seems impossible to believe that he, the brightest and most cheerful of all, has gone.  He died splendidly, helping to save what looked like a very critical situation for some minutes.”  (Unnamed Regimental Captain – British Roll of Honour).

Rowland Auriol Beech died on 21st February 1915.  In 1914 he was ‘Mentioned in dispatches’ for his bravery in the face of the enemy.  Rowland Beech is commemorated in Ypres Town Cemetery, Northern France. (CWGC website). 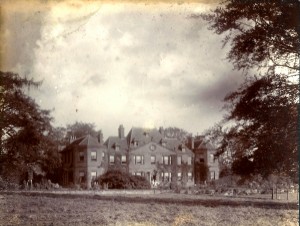 Footnote 1.  Jim Beech appears to have been the quintessential English gentleman of the Edwardian era with a great love of horses. Whilst in the army he took part in equestrian events of all sorts including appearing at the Olympia Horse show in 1913. Indeed whilst in France it seems he had a pack of hounds for hunting (there is a picture of him with the pack in the early days of the war) although it seems opportunities were rare. Given that he was a cavalry officer and had a love of horses it is even sadder that his death occurred whilst fighting in the trenches as infantry which whilst it was how the cavalry in the British Army were trained was sad never the less . This transformation happened to many mounted units as the war quickly made mounted soldiery obsolete. After his death he was described by a Senior Officer as the best horseman in the British or any army.

Footnote 2:  Jim Beech kept a daily diary that records his thoughts and the units activities from the outbreak of war until the end of November 1914. Sadly his diary after this date and photos he had taken during the period are lost. His diary to the end of November has been presented to the Regimental Museum as a piece of history that records those early days of the war.

Fotenote 3: The war was a particular tragedy for the Beech family.  Following Jim’s death his father re-enlisted and went to France. He saw out the war but died as a result of his active service in 1919.  Jim’s sister ‘Kitty’ married Arthur William Macarthur-Onslow who was a Captain in Jim’s Regiment. He  died in November 1914.

Footnote 4  With regard to the book referred to in the above – ‘At The Going Down of the Sun – 365 Soldiers From the Great War’. Jim Beech was one of 365 soldiers who died in the war picked to be in this book. Each night when the last post was played at the Menin Gate in Ypres during 2002 a soldier was remembered. On 21st February 2002, 87 years to the day since he was killed Jim was remembered. Present were members of the Beech family and the regiment he served in.

Footnote 5:  The following is a comment from the Beech Family Archives, “The Shawe (or Shawe Park as it was also called) was the original Beech family home – Kingsley in Staffordshire.  When I first saw it in the mid 1950’s it looked remarkably as above (pictured), though it was unoccupied. Sadly, eventually it became much neglected and later totally ruined and has since been pulled down.  The only thing to remain is the sundial.  Douglas (Beech) sold The Shawe and all the tenanted farms soon after he inherited it, preferring Brandon, where hunting with the Atherstone Hounds was more fun.”  (Mrs Geraldine Dalrymple-Hamilton (formerly Beech), Beech Family Records).

Footnote 6:  We are extremely grateful to members of the Beech family who kindly gave us access to family records / archives which have been most helpful in compiling our account of the life of Rowland Auriol James (Jim) Beech.

Footnote 7: Part  of the 16th Lancers story from the war was published in the Britaion at War Magazine in the autumn of 2014 and was written  by Mark Crame. We are grateful to Mark for a large archive of photos and history of the lancers which we are currently sifting through.