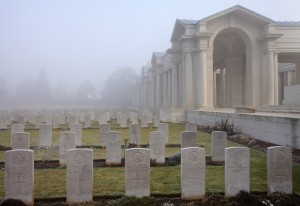 Thomas Clowes was born during the period April – June 1893 (UK Birth Index) the son of Robert and Lavina Clowes, the youngest of their three children.

In 1901 the family were living at Homefield, Kingsley, at which stage Robert Clowes (Father) was employed as a General Estate Labourer, the children being Annie (16yrs), Ada (10yrs) and Thomas (7yrs).  (1901 Census).

By 1911 the family had moved to The Dams, Kingsley, at which stage Robert Clowes (Father) was employed as a Wood Manager / Timber Feller.  Thomas, aged 17yrs, was recorded as being a ‘State Labourer’ possibly meaning an Estate Labourer.

Thomas Clowes married Ethel Annie Potts in the Cheadle area in the summer of 1914, (she later remarried and lived in Abbots Bromley).

On a date as yet to be clarified Thomas Clowes joined the Army initially joining the Royal Field Artillery at Cheadle with a service number of 140483. At some point  after that he was posted to the Duke  of Cornwalls Light Infantry, 6th Battalion.

His medal record indicates that he did not enter the theatre  of operations until 1916 although the exact date is unclear. This is confirmed by the Battalion war diary which records the nominal role as of  20th December 1915 and there is no T Clowes.

October 1916 had the battalion in the Arras area  of France taking part in the Battle of the Somme. The diary reveals periods of action in the trenches and then rest and refit in the rear. Unusually there is rarely any mention of any officers and there is seldom any mention of the numbers of casualties in the diary.

15th October saw the unit back in the trenches and the diary over the next few days records trench mortar and artillery fire from both sides with little actual fighting and no reference to any casualties although it seems inconceivable that soldiers were not being wounded or worse.

There is also reference to our aeroplanes flying behind enemy lines and barrage balloons being hastily pulled down by the Germans.

For the 19th October the entry is brief and records that the Germans were shelling and mortaring the Cornwall’s front line and communication trenches and also that Arras itself was shelled. It adds that machine gun fire was kept up during the night.

There is no mention of casualties on this date but according to official records Thomas Clowes was killed on this day. The likelihood is that he was killed by enemy shelling. He was one  of two men killed that day – the other being a Fred Cooper from Huddersfield. Over the month of October the 6th Battalion lost 8 men all of whom are buried in Commonwealth War graves. A ninth died in the United Kingdom.

Both Thomas Clowes and Fred Cooper are  buried in the Faubourg D’amiens Cemetery, Arras, Northern France.

Footnote 1.  The Duke of Cornwalls Light Infantry 6th (Service) Battalion was raised at Bodmin in August 1914 as part of Kitchener’s First New Army and joined 43rd Brigade, 14th (Light) Division. They trained at Aldershot and spent the winter at Witley, returning to Aldershot in February 1915. They proceeded to France, landing at Boulogne on the 22nd May 1915. They fought in the The Action of Hooge, being the first division to be attacked by flamethrowers. They were in action in The Second Attack on Bellewaarde. In 1916 they were on the Somme seeing action in The Battle of Delville Wood and The Battle of Flers-Courcelette.  (Wikipedia)

Footnote 2.  The Battle of the Somme took place between 1 July and 18 November 1916 on both sides of the River Somme in northern France. The battle was one of the largest of World War I, in which more than 1,000,000 men were wounded or killed. (Wikipedia).
Footnote 3.  The Thiepval Memorial commemorates 72,000 officers and men from Britain and South Africa who lost their lives during the Battle of the Somme and have no known grave.  Four men from Kingsley Parish are commemorated on the Thiepval Memorial; Charles Allen (died 12th August 1916), Isaac Hammond (died 31st August 1916), George Price Bevans (died 8th September 1916) and Arthur Keene (died 12th October 1916).