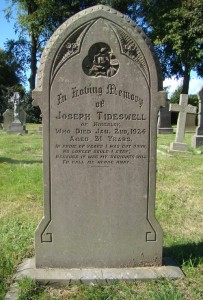 We have previously published an article about who was J Tideswell (link HERE) and it has been a somewhat difficult process of concluding who he was. Its somewhat fitting that he is the last of our 28 men that we feature on this site.

At one point it was any one of four men who might have been J Tideswell – we haven’t got ready access to local papers for the period but in fairness his death would have been from 1919 onwards so a bit of a needle in a haystack.

What clinched it as to which one was based on a gravestone in the church yard of St Werburgh’s, a search of Navy records that showed us a man who served and came from Kingsley plus his death certificate that gave his service number which linked in with the service record.

Joseph enlisted in the Royal Navy on 31st August 1909, aged 18 yrs, for an initial period of 3 years.  He was allocated Service No. K17369 and assigned duties as a trainee Stoker.  During his initial medical examination Joseph was described as being 5 feet 8 inches tall, with blue eyes and fair hair.  In 1912 he extended his naval service by signing on for a further 9 years.

As will be seen Joseph spent most of the war serving on HMS Glorious a Battle Cruiser patrolling the North Sea.  (Wikipedia).  He was subsequently awarded the Victory Medal, Star and British War Medal.  (Royal Navy records).

Joseph Tideswell was retired from the Royal Navy on 6th December 1922, after 13 years service. His Naval record is finalised as, ‘Invalided – Tuberculosis.’

Joseph died on 2nd January 1924, aged 31yrs, some 13 months after his discharge from the Royal Navy.  The Death Certificate confirms his cause of death as ‘Pulmonary Tuberculosis’.  At the time of his death Joseph was living with his brother Harry (Henry) at No. 1 New Hall Street, Kingsley.  The death certificate confirms he was ex Petty Officer Stoker K 17369 formerly of HMS Collingwood (shore establishment in Hampshire)

Joseph Tideswell is buried in Kingsley Churchyard.  The inscription on his grave reads, “In the prime of years I was cut down.  No longer could I stay; because it was my saviours will to call me hence away.”   His grave is not recorded by CWGC as a ‘War Grave’ as his death was outside of the dates set for inclusion which were 4th August 1914 to 31st August 1921 .

Footnote 1:  HMS Glorious was the second of the Courageous-Class Battlecruisers built for the Royal Navy during the First World War. Designed to support the Baltic Project championed by the First Sea Lord, Lord Fisher, they were very lightly armoured and armed with only a few heavy guns. Glorious was completed in late 1916 and spent the war patrolling the North Sea. She participated in the Second Battle of Heligoland Bight in November 1917 and was present when the German High Seas Fleet surrendered a year later.  (Wikipedia) 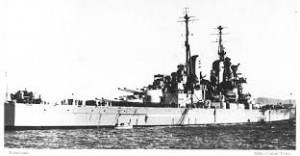 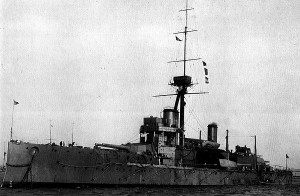 Footnote 2:  The Second Battle of Heligoland Bight, also called the Action in the Helgoland Bight was an inconclusive naval engagement fought between British and German squadrons on 17 November 1917 during the First World War.  Following the German Navy’s successful raid on the Scandinavian convoy on 17 October 1917, Admiral Sir David Beatty, Commander-in-Chief of the British Grand Fleet, determined to retaliate.

On 17 November 1917 a strong force of cruisers under Vice Admiral Trevylyan Napier was sent to attack German minesweepers, which were clearing a channel through British minefields in the Heligoland Bight. The intentions of the German force had been revealed by British Naval Intelligence, allowing the British to mount an ambush.  The German sweepers were escorted by a group of cruisers and torpedo-boats under Rear Admiral Ludwig von Reuter.

The action began at 7.30 a.m., roughly 65 nautical miles west of Sylt, when HMS Courageous sighted the enemy. She opened fire at 7:37 a.m. Admiral Reuter, the German commander, with four light cruisers and eight destroyers, advanced to engage his more powerful enemy in order to cover the withdrawal of his minesweepers, all of which escaped except for the trawler Kehdingen, which was sunk. The battle thereafter developed into a stern chase as the German forces, skilfully using smoke-screens, withdrew south-east at their best speed, under fire from the pursuing British ships of the 1st Cruiser Squadron, the 1st and 6th Light Cruiser Squadrons, and, later, HMS Repulse (which had been detached from the 1st Battlecruiser Squadron and came up at high speed to join the battle).

Both sides were hampered in their maneuvers by the presence of naval minefields.  The British ships gave up the chase some two hours later, as they reached the edge of known minefields. At about the same time, the light cruisers came under fire of two German battleships, SMS Kaiser and SMS Kaiserin which had come up in support of von Reuter’s ships; HMS Caledon was struck by one 30.5 cm (12.0 in) shell which did minimal damage; shortly thereafter, the British forces withdrew.  All personnel on the bridge of the light cruiser HMS Calypso, including her captain, Herbert Edwards, were killed by a 15 cm (5.9 in) shell. The Battlecruiser HMS Repulse, briefly engaged the German ships at about 10:00, scoring a single hit on the light cruiser SMS Königsberg that ignited a major fire on board.

It was during this battle that Able Seaman John Henry Carless of HMS Caledon won a posthumous Victoria Cross for his bravery in manning a gun despite mortal wounds.  (Wikipedia)

Footnote 3:  Elsa Bloxham who lives in Barnfiels Lane, Kingsley, is a relative of Joseph Tideswell.  Elsa’s Grandfather, Isaac Tideswell, was Joseph’s older brother.  Her father Joseph Henry Tideswell was named in memory of his Uncle Joe.