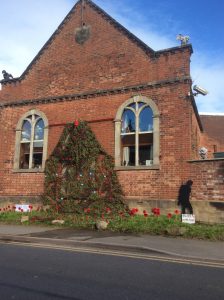 The 11th of November 2018 marks the centenary of the end of World War One and is an opportune moment to pause and reflect on the events of a century ago.

Many Kingsley men would begin to return from the war, indeed a few had already returned due to injuries and illness. Ernest Capewell, Arthur Carr, and  Harry Carr were among those invalided out of the service.

Those who came back brought with them both physical and mental scars and of course 25 men did not return having been killed during the war. The last two men to die in 1918, John Salt and Kenneth Lovatt did so after the Armistice.

In the years after the war, four more men were to die as a result of their service.

In recent years the sacrifice and suffering of our servicemen and women have come to the fore and now as we near this auspicious centenary it is only right we pay our collective respects to those who served all those years ago and still do to this day.

The Kingsley Remembers Project has joined forces with the Parish Council, St Werburgh’s Church and The British Legion to host a series of events in the run-up to the 11th November and on the day itself.

We are grateful that the Parish and District Councils have donated over £400 to ensure we can do justice to the events we are holding.

The images below are from   a flyer that has been delivered in the Kingsley Holt News and will be delivered in Kingsley in the next few days. Do take time to see what’s on and where and do make an effort to attend. 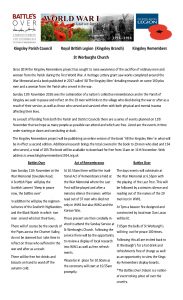 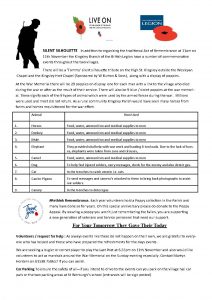 The British Legion in the run up to the 11th will have a display of Poppies at the Methodist Chapel in Kingsley Holt and outside the old Wesleyan Chapel on High Street Kingsley. At the War Memorial there will be another display of Poppies, 29, one for each man who died as a result as well as 9 blue or violet Poppies, one for each type of animal that was used in the war effort.

On 11th November there will be a series of events from dawn until dusk involving the Battles Over national tribute to those who served.

6 am – a Scottish Piper will play at the War Memorial. There will be free refreshments to ward off the autumnal cold.

10.55 am – traditional Act of Remembrance at the War Memorial (be in place for 10.50am) followed by a service at St Werburgh’s Church.

After the service there will be a display of the research undertaken by the project team, free refreshments and the launch of a limited edition of the All the Kingsley Men (50 copies) which includes 22 more men who served, extra pictures and more on those from the first edition.

An online version of the book will also be launched as a free download.

6.55pm – at the War Memorial there will be the playing  of the Last Post (we are after a trumpet or cornet player to play live – get in touch if you know of someone) At 7pm a Beacon designed and made by local man Dan Lucas will be lit (again as part of a national series of beacons).

Following the reading  of the names of the 29 men who lost their lives at 7.05pm the bells of St Werburgh’s will ring out for peace as they did in 1918.

All are then invited to return to St Werburgh’s for hot soup and refreshments free  of charge. The displays will still be there and the book on sale. 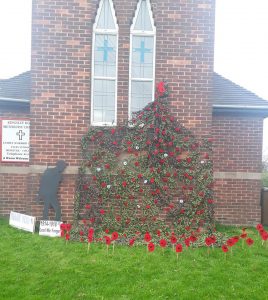