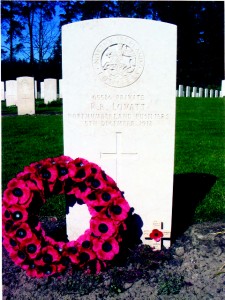 Prior to enlistment Kenneth Lovatt was employed as a Coal Miner at Parkhall Colliery, Cheadle / Dilhorne. (Andrew Bull)

Kenneth Lovatt enlisted as a teenager during WW1, (date as yet unknown), and was originally posted to the West Riding Regiment, Service No. 39449.  Later he was transferred to the Northumberland Fusiliers, 14th Battalion, Service No. 65586.  Kenneth Lovatt saw active service in France and Flanders. (Ancestry records).

A personal diary kept by Kenneth Lovatt indicates that in May 1918 his regiment were deployed in the area of Cormicy, (north of Reims), in trench defences on the Western Front.  Given this location it is likely the regiment were involved in the ‘Aisne Offensive’, which began in the early hours of 27th May 1918 when the German forces launched the third phase of their ‘Spring Offensive’, a determined attempt to break through the allied defensive lines in the area around Reims.  The diary indicates that Kenneth Lovatt was captured by German forces on 27th May 1918 and became a ‘Prisoner of war’.

The 14th Batallion Northumberland Fusiliers were a Pioneer battalion in that the soldiers were trained to fight but also to carry out construction work often transferring skills from civilian life. In Kenneth Lovatt’s case his mining background would have been useful.

The war diary for the period has been sourced and on the day of his capture does not make any reference to anything untoward saying ‘enemy bombardment opened up at 1am and in accordance with defence instructions HQ moved to a position near to Hermanville. At 8.30pm HQ moved to Champigonieres where Capt’s E H Hills and (illegible) reported with the remainder of the companies’ It continues to say that on the following day they were instructed to take up a position nearby but found it occupied by the Germans so they had to withdrawal.

There is no mention of casualties or direct fighting but its likely that during the move after the bombardment there were some skirmishes that led to the capture of Kenneth Lovatt. The Northumberland Fusiliers saw 220 men die on 27th May 1918 – all bar a few in France in the same area suggesting they were fighting in the same area despite there being many battalions. There is a CWWG cemetery at Hermoville and there is a single casualty buried there who died on 27th May 1918 and was in the 14 th Battalion.

In October 1918, after some months in transit, Kenneth Lovatt was transferred to the Lamsdorf Prisoner of War Camp, (German occupied Poland).  As will be seen, Kenneth Lovatt was cruelly treated whilst a prisoner of war given only minimal starvation rations and poor health care in circumstances which he understandably found hard to bear.

Kenneth Lovatt died on 5th December 1918, aged 19 yrs, at the Lamsdorf Prisoner of War Camp, less than 3 weeks after the German surrender.  He is buried in the Berlin South Western Cemetery.

A local newspaper report shortly afterwards comments, “We are sorry to give particulars of the death of one of our brave lads, Pte. Kenneth R Lovatt.  The bereaved father and mother have been anxiously waiting for some definite news of their son and they have been convinced that he died at Lamsdorf Camp on the above date. (5th December 1918).  It has been a great blow to them and we feel sure they have the deepest sympathy of everyone in their great sorrow.  We give a few particulars taken from his diary by one of his chums which has reached his mother.”

“He was captured at Cormicy on 27th May 1918.  Issued out with blanket, pants and shirt and went to baths; had a haircut and shave: lived mostly on elderberries, snails, potato peelings, frogs and hedgehogs.  Sept 19th – moved from Bazancourt to an awful place; awful conditions; up to the neck in mud, and sleeping in huts not fit for pig styes; no letters or parcels been heard of: fell down in a faint through weakness.  Sept 27th – Boots are worn out and no chance of getting them mended; dinners no thicker than water and bread ration down to about 250 grams and more work to do; 21 men went to hospital in 3 days, all sick men who could walk had to march 6 kilos in pouring rain to see the doctor who looks at your tongue and marks you MD (medicine and duty).  Fainted 3 times in one day and went to hospital at Givet and was very well treated – 6 slices of bread and 3 soups a day.  Left hospital about 16th October and had 6 days journey to Lamsdorf, in German Poland.  400 grams of bread, 3 soups a day, and received half a parcel one week and 2 kilos of biscuits and next week 1½ kilos and an emergency.”

Footnote 1:  Battle of Aisne: At 01.00hrs 27 May 1918, over 3,700 German guns opened up in the fire pattern devised by Colonel Bruchmuller, saturating the gun emplacements, isolating the HQs as the communication lines were broken, and disorientating the defenders. The effect of gas shells was not to kill, but to cause every possible form of nuisance to the key personnel of the British Army in carrying out their duties. Everything was made more difficult, everything was more uncomfortable, everything was more tiring and stressful.  The barrage went through its phases until the stormtroopers burst out of their trenches at 03.40hrs. No one in either 8th Division or 50th Division Headquarters had any idea of what was happening. Officers like Captain Lyon (1/6 Durhams, 151 Brigade, 50th Division) had to emerge from their dugouts to check for themselves. When he looked at the German lines he could see that the new German tactics were to put the advance troops immediately behind the barrage so that the British defence had no time to recover. He observed files of German troops immediately in front of his own line. They were advancing leisurely meeting with little or no resistance. When he looked up he could see German aircraft sweeping the trench line with machine gun fire. It soon became apparent that the British defence had crumbled.  (Wikipedia).

Footnote 2.  Lamsdorf Prisoner of War Camp was situated in German occupied south west Poland, near the German border.  It had previously been used as a Prison of War Camp in the the Franco Prussian war.  The camp was reactivated during World War I, when the Germans set up one of the largest camps for prisoners of war, housing roughly 90,000 internees, mostly from the United Kingdom, Russia, Italy and Serbia. Due to poor housing conditions roughly 7000 men died in captivity.  (Wikipedia).