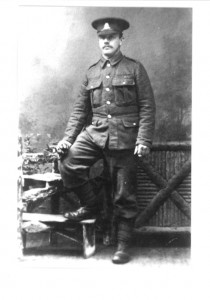 In 1911 Colin, then aged 22 yrs, was living at the Royal Oak, Dilhorne, where he was employed by the Licensee as a Servant / Farm Worker.  His parents and younger siblings remained living at the family home in Blakeley Lane.  (1911 Census).  Prior to enlisting Colin was employed as a Collier at Foxfield Colliery Dilhorne.  (Army Records).

Colin Capewell joined the Army on 7th September 1914 within weeks of the outbreak of the war.  At the time of enlisting he was aged 26 years and one day, 5 feet 3¾ inches tall, weighing 9 st 11 lbs.  Service No. 14806.  Colin was posted to the North Staffordshire Regiment, 9th (Pioneers) Battalion.  After initial training and several UK based postings, on 28th July 1915 he was posted to France as part of the ‘British Expeditionary Force’.  (Army Records).

Private Colin Capewell was trained as a Lewis Machine Gunner. He remained on active service in Northern France from 1915 until 1918 during which time he twice returned home on leave.  On 14th October 1917 he was temporarily promoted to the rank of Lance Corporal (L/Cpl) which was confirmed three months later.  (Army Records).  At a later stage Colin Capewell was promoted to the rank of Corporal.  (Times and Echo – Press Article).

The North Staffordshire Regiment, 9th Battalion, were involved in action and numerous battles on the Western Front in Northern France during WW1.  In May 1918 the regiment formed part of the allied defences attempting to repel the German Spring Offensive. 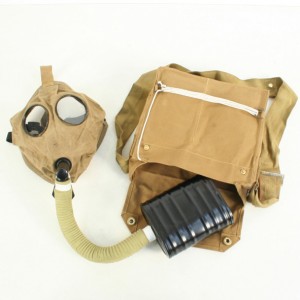 On the evening of 11th May 1918 elements of the regiment including Colin Capewell began work. As a Pioneer Battalion the 9th were involved in construction work. At this time they were in the Fonquevillers area north east of Amiens. They were more than likely repairing roads that had been damaged in shelling the previous day. The war diary reports that the Germans started to shell the area at around 5pm and this continued up until midnight. The entry records that for some time they were unaware that some  of the shells were gas shells. It adds that over 2000 gas shells were fired in the five hours of shelling and that great difficulty was experienced in wearing the box respirator which was the main protection from the effects of gas.   (An example of the respirator is pictured)

The diary makes no mention of any casualties but according to Colin’s service record it states on the 12th May he suffered the effects of gas inhalation. The entry for the 12th states merely ‘work as usual’ so the assumption is that he was injured on the 11th into the 12th. Whether he was taken to hospital straight away is unclear, his service record entry is dated 18th May and states he had suffered a gas shell injury on 12th May. The diary records that for the month of May 1918 the battalion suffered 61 killed – of these 59 were due to the effects of gas in addition 131 were injured as the result of gas attacks. The total killed and wounded in the month were 211 men which given that the battalions strength during the month was around 800 means that 1 man in four was killed or injured.

He was taken to the No. 9 General Hospital, forming part of GHQ (3rd Echelon), in the area of Rouen.  On 26th May 1918 Colin Capewell (then aged 30 yrs) died from Pneumonia brought on by the effects of poisonous gas.  (Army Records).  Following his death a special memorial service took place at Kingsley Moor Mission Church which was well attended.  (Times and Echo – Press Article).

He is commemorated in the St Sever Cemetery Extension, Rouen, Northern France.  (CWGC Records).  Colin Capewell was posthumously awarded the British War and Victory Medals which were signed for by his mother, Emma Capewell.  (Army Records). 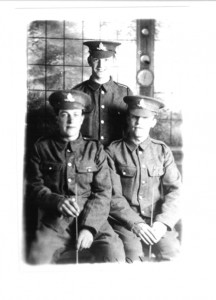 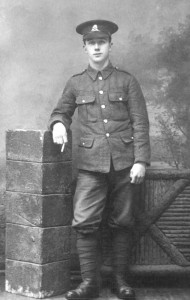 Colin had two younger brothers Frederick Capewell (Duke of Cornwalls Light Infantry) and Ernest Capewell (North Staffs Regiment) who both saw active service during the WW1.  At the time of Colin’s memorial service Frederick was a prisoner of war and Ernest was in hospital in Blackburn being treated for wounds received during the war. (Times and Echo – Press Article).

Frederick Capwell is pictured standing in the centre of the picture above on the left and Ernest is picture in the photo bove on the right.

Footnote 2:   Rouen Military Hospitals.  During the First World War, Commonwealth camps and hospitals were stationed on the southern outskirts of Rouen. A Base Supply Depot and the 3rd Echelon of General Headquarters were also established in the city.  Almost all of the hospitals at Rouen remained there for practically the whole of the war. They included eight general, five stationary, one British Red Cross and one labour hospital, and No. 2 Convalescent Depot. A number of the dead from these hospitals were buried in other cemeteries, but the great majority were taken to the city cemetery of St. Sever. In September 1916, it was found necessary to begin an extension, where the last burial took place in April 1920. (CWGC website).

Footnote 3.  Peter Capewell, the son of Ernest and nephew of Colin Capewell,  lives in Gorsty Hill, Tean.  Peter Capewell was instrumental in the St Johns Church (Kingsley Moor) Plaque being refurbished and re-sited in St Werburghs Church, Kingsley. Yvonne Eady is the granddaughter of Frederick Capewell. She lives in Northampton and came to our notice when she visited the war memorial to remember Colin Capewell. Both Peter and Yvonne have provided a wealth of information on Ernest and Frederick which will form the basis of a separate article in the next few weeks.